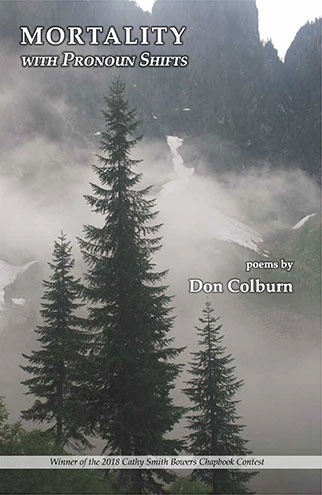 “I loved this book from the get-go. The title itself is a brilliant juxtaposition of opposites: the archetypal, biblical, emotion-laden word mortality paired with such a sterile, academic phrase as pronoun shifts. Throughout the book, this stark tension of opposites never flags. Who wants to read an entire book of poems about death? I’ll take one any day—if it is written by this author.”

“Don Colburn is adept at enacting the old exclamation of wonder: Imagine that! as he enters what he reads: the “breaking news” of other lives, imagining what it is like to be caught in their mortal dramas, even as, with irony and candor, he explores his own encounter with time. Whether in praise or in outrage, his poetry doesn’t need to raise its voice, but closely observes, cares for and endows with meaning what it sees.”

Don Coburn takes a vivid glimpse—at an ancient tree, an artifact, a comment by a stranger—and feeds it his attention, like water to a seed, so this glimpse may grow into a poem to gift us insight. In this book, spirit captions to the visible world take us inside enigmas that have arrested him and kindled these poems. Read their prismatic discoveries that make the ordinary strange, and the mysterious precious.

Tomorrow Too: The Brenda Monologues 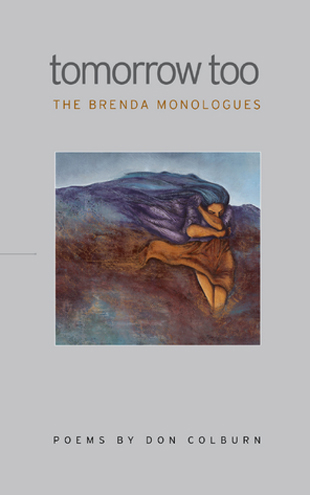 “[A] deeply moving collection...Lines between journalism, theater, poetry and story dissolve. A spoken opera of life evolves aria by aria and is delivered with great elegance. Clear and subtle, harmonies and discords sing on the pages.”

“Don Colburn has written a series of sonnets that read like a miraculous story. Some might say it's a story about sickness and death, but the voices of these people live on long after I close the book. A story about life then, in poems so particular and real I was brought to my senses. You want to feel as alive as you actually are? Read this book.”

—Marie Howe, author of What the Living Do, and Poet Laureate of New York

“From the first time I read them, these poems grabbed my heart and have not let go. They trace a deeply moving story from surprising and multiple points of view. Don Colburn has packed so much wisdom and heart into these spirited lines, honoring a woman whom I was lucky enough to know during her too-short and shining life.”

Read a Q&A with Don in The Oregonian 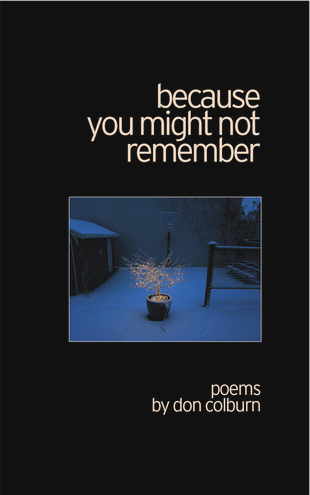 “Colburn is at the top of his form here — subtle, self-effacing, hopeful and skeptical. Reading a Don Colburn poem is like putting the top down on a sunny day and taking off in your old Olds convertible with no particular plan in mind. And then there you are.”

“Don Colburn's richly rooted, well-hewn poems are intensely pleasurable to read and absorb. The wide span of their attention has room for human foibles and flaws as well as fun.”

On the poem “Coach”:

“There’s a crackling life-affirming energy in this poem as it plays its own linguistic games with some interesting internal and slant rhymes. What’s more -- nothing is forced as it almost effortlessly earns its magical last line.”

—Judith Kitchen, final judge, on why she chose “Coach” as winner of the Duckabush Prize for Poetry in 2009

As If Gravity Were a Theory 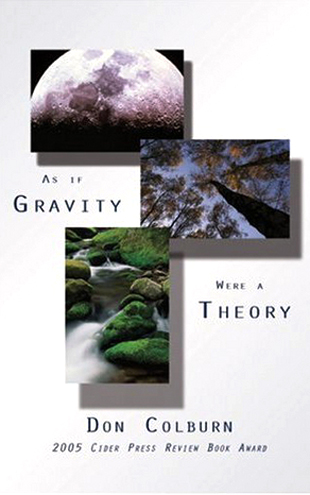 In choosing As If Gravity Were a Theory for the Cider Press Review Book Award, poet Virgil Suarez writes:

“This is a gifted poet, for sure. One fully aware of the ability of image to carry the burden of language, except there's no burden here. Not at all. These poems are at best richly elegiac and nostalgic, but the good kind of nostalgia. The kind that reconnects us with nature, with kin, with all the dead poets and people in our lives.”

“In Don Colburn's As If Gravity Were a Theory snow falls up, a wrecking ball is a ‘two-ton teardrop,’ and storm-thrashed trees mimic the violence of drowning. Colburn's poems bring us into contact with the simple magnificence that surrounds us daily. They give us the eyes to peer into the familiar strangeness of experience wherein lies the astonishing invisible world, and for this power we should be deeply and humbly grateful.”

Available from the author or Amazon.com

Another Way to Begin 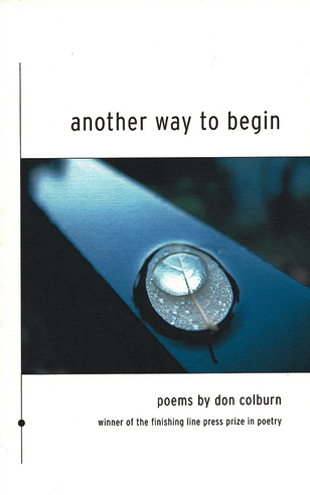 “In this fine first collection, precisions of the journalist regularly fuse with the lyricism of the poet, so much so that in Colburn's sure, humane voice they seem inseparable. And then there's "In the Workshop After I Read My Poem Aloud," which shows a mastery of tone, and makes us laugh.”

—Stephen Dunn, winner of the Pulitzer Prize for Poetry

“Don Colburn has that rare, consoling gift: a pure lyric voice, nature bathed in what Keats called poetry's "drainless shower of light." In Another Way to Begin, the world happens again, opening into meaning, in the rich music of its saying.”

“In Another Way to Begin, Don Colburn honors what he loves — his parents and literary mentors, the mysterious beauties of nature, a wise child, a dead friend, a beat-up first baseman on national display — and in the quiet precision of his lyrics, he honors the making of poetry itself.”

—John Daniel, poet and winner of the Oregon Book Award for literary nonfiction